Last week in my C25k recap, I told the story of the Pre-K plague and that it wiped me out. I wasn’t able to complete week 2 that week.

I am not back to 100% but I was able to successfully re-do week two last week.

I know you are supposed to do the runs every day but I do them on Tue, Wed and Fri. This is because I have to work around my daughter’s gymnastics and dance classes. It’s not ideal, but I am only one person.

The first I used was Chubby Jones.

The second I used was the rock version of Carli Fierce

The third I used was one of the two podcasts from Go Nicole Yourself.

All the podcasts work. Chubby Jones talks with you on a friend level and I like that. (She also commented on my blog which gives her bonus pounts).

I did like Nicole’s music the best. I like that she uses faster songs for the run intervals. She also has no chatter, just a countdown to interval changes so if you don’t want any talk, that might be a good choice.

This week I will be working on week 3!

This weekend I did the first of my long runs for my half marathon training.  My training cycle has gotten off to a slow but steady start.  I have joined a new gym called Metabolic Meltdown and I do those workouts on Monday, Wednesday and Fridays and I run on Tuesday, Thursdays and Sundays.  I was having trouble motivating myself by just running and I need more strength so I hope this plan works.  So far I have been enjoying it.

So on Sunday I took my daughter to the local university and did the 3 mile loop around campus, plus one extra mile.

It was the longest four mile run I have ever done.

First of all, since I have slacked off on my training, I gained weight and I was pushing a stroller with my almost 3 year old.

My daughter kept dropping things and I kept having to stop and pick them up.

My daughter saw one of the Albany city busses and kept saying ice cream truck.  I told her it was a city bus, but she wouldn’t believe me.  I told her she would disappointed if we went over and tried to order ice cream.

But I made it through the run.  I think when I reach the six mile mark on my long runs that I will need to get a babysitter.  I can’t be pushing the stroller for 8 miles.  I will go nuts.

I was really wanting to get an iced coffee but I decided to stop and let my daughter run around the fountains.  She was so happy which made me happy.  Life is about the little moments. 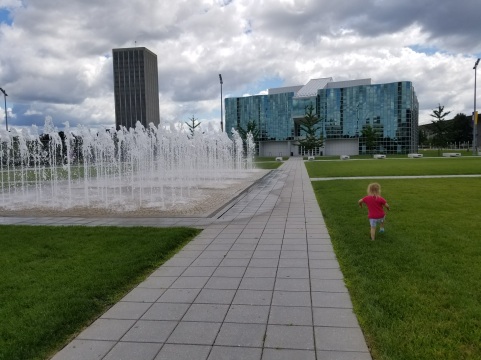 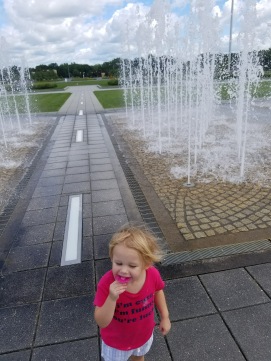 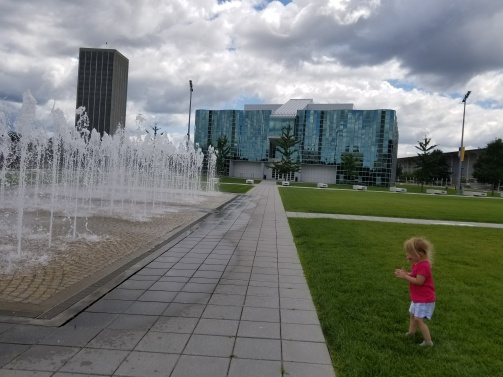