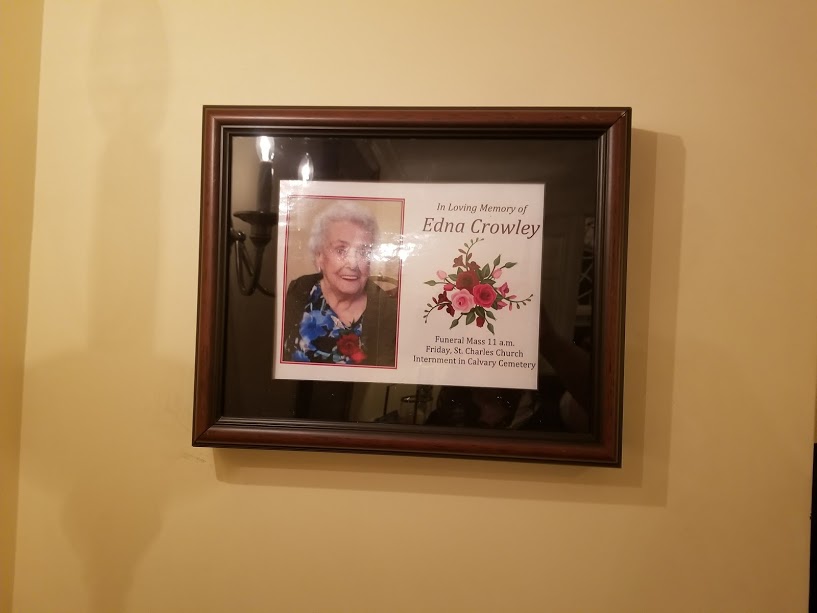 If you have been reading my blog and have playing at home, you may realize that I have attended 3 funerals within a 30 day period.

I have heard that 2018 is a year of rebirth and in order to have rebirth, there must be death.

But this, along with the fact that almost daily, it seems like someone on my Facebook newsfeed will lose someone they love, it all does seem excessive.

I managed to go 15 months after Bryon’s death with no funerals.   This span of time did not seem unusual.  My friends still seem to be in the feel-good era of engagements, weddings, new houses and babies.  Funerals are much less common.

First my friend Andy died and I traveled to Maine to say good-bye and to show support to his wife, who is a dear friend of mine.

Then one of my best friends fathers passed away unexpectedly and I attended his funeral to show support to my friend.

Around the time of my best friends fathers death,  I got the news that my grandmother who had been recently ill, made a turn for the worse.  I decided I wanted to see her but I was going to wait until my parents were able to make the trip from Maine to Boston (really the town of Woburn, which is what I call “Boston-ish”).  I wanted to say good-bye but I wasn’t sure if I could handle being around a dying person after seeing Bryon die. I am sure I would  have been fine but I wanted my parents to be there just in case.  Plus, I would have my daughter and it would be easier to have my parents around (though I am sure my aunts and uncles would have helped watch her).

I never got to say good-bye to my grandmother.

She died the day before I was to make the trip.

I felt guilt but I know that it meant I wasn’t meant to be there, for whatever reason.

My grandmother’s death isn’t completely unsurprising.  She was 95. We were lucky to have her for as long as we did.  But the illness that led to her demise was brief.

Like any death, the world stops for everyone close to the deceased.  My family, who lives in the Northeast and in Florida, made our arrangements to get to Boston. 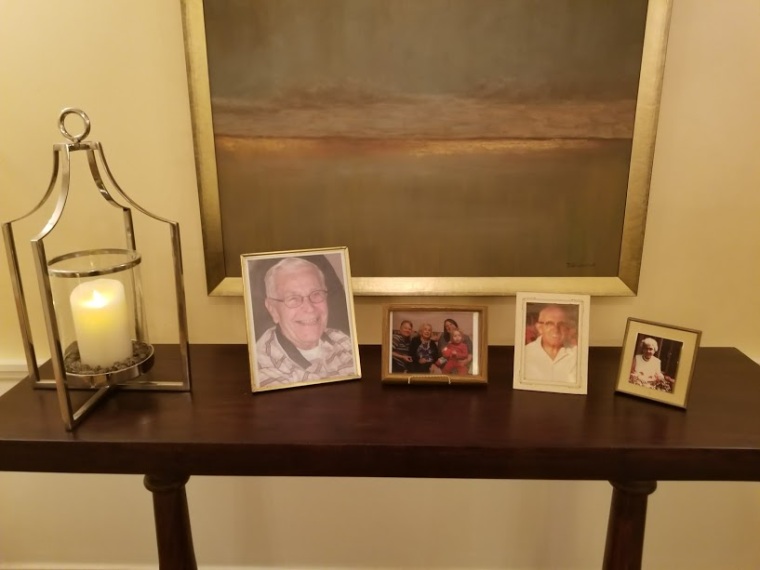 My Nana’s wake was at the funeral home where all the Irish in South Woburn go to.  (Though ironically my grandmother was not Irish.  She was a French-Canadian who married into an Irish family).  I have often made jokes that I grew up at this funeral home.  This is the place where I have said good-bye to all four of my grand-parents, two uncles, a whole bunch of great-aunts and great-uncles as well as relatives of those married into our family.

We comforted one another.

We took comfort in those who stopped by to pay their respects.

We lamented that it was a shame we only see each other at funerals.  (We need to change that!)

My cousins 8-year-old daughter entertained (and wore out) my three-year-old daughter.  They were the reminder that while it’s sad to say good-bye to those who leave us, we also get to embrace the newer younger family members.

We saw many distant family members who remarked that it felt like yesterday that I was my daughter’s age.

My cousins and I spent time together and went out for Boston Chinese food and drinks (which will be it’s own post).

My grandmother’s death was different than my other three grandparents death because she is the last.  The last grandparent and really my last connection to the town of Woburn.  All of my relatives have spread out.  I spent so much time in this town.  In some ways, this town felt more like my hometown than my actual hometown of Billerica, MA.

It is truly the end of an era. 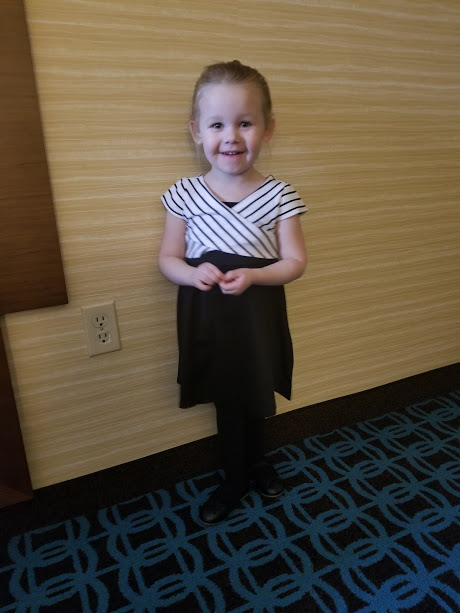 My daughter seemed to take her great-grandmother’s death well.  She understood that Nana was in Heaven with Daddy.  That didn’t surprise me as her father died when she was so young. I recently read Ariana Huffington’s book “On Becoming Fearless” which had a chapter about fearing death. She brings up Rory Kennedy, whose father Bobby Kennedy was assassinated while she was in utero.  She said that Rory Kennedy has stated that she has always known death due to the absence of her father.  Since Bryon died one month before our daughter’s second birthday, she knows what death is.  She knows that she doesn’t get to see her father in his earthly form and that means that she completely understands that she will never see Nana in her earthly form again.

On the way to the wake, it dawned on me that Bryon had had a closed casket but my Nana would have an open casket.  I told my daughter that she might see Nana and it will look like Nana is sleeping but Nana is really in Heaven with her Daddy and my daughter seemed to accept my explanation.

I know I am probably in the minority in my family.  I was actually happy for my grandmother.  I think of all of the people I have said good-bye to during my 39 years and I can’t imagine how many people she had to say good-bye to in her 95 years.  She gets to be reunited and I am sure it was one heck of a reunion party.

I am also hesitant to write this next paragraph because I don’t want my feelings to be misconstrued.   I want to be clear that I hope I live long enough to see my daughter grow up and meet my grandchildren and maybe even my great-grandchildren. I hope I live a long life, marry again, travel the world, that I get to help a lot of people and make a difference.

But when my time comes, I know Bryon will be there, kind of like Leo and Kate. But instead of the Titanic, it will be the latest cruise ship. And knowing that I will be reunited with Bryon (as well as everyone I have ever loved) takes away the fear of death.  And it will be one heck of a reunion party.

I felt happy for my Nana because she is reunited with my grandfather, her son, her parents, her siblings as well as a lot of relatives and friends.  She got her Kate and Leo moment.

I felt emotionally alienated experiencing this loss.  Because I did not reach the expected level of sadness as everyone else in my family.

Losing my grandmother was sad but burying my husband in my 30s was much, much harder for me.

I began to wonder if I have become cold and unfeeling or if I just have a different perspective?

My life changed forever 23 months ago.  The first five months of those 23, I lived in fear, desperation and in complete survival mode.  After that, I experienced grief beginning with raw grief.  Raw grief is an exhausting roller coaster.  At my grandmother’s funeral, I began to wonder if I have grieved all of the grief out of me.

I am all out of grief.  Like, take Air Supply’s “All out of Love” and replace “Love” with “Grief” and then completely change the lyrics of the song so they make sense and it is just like that.

I feel like my experience can be compared to cold medicine. Grieving is like the feeling you have when you are on cold medicine.  You are unwell (at least emotionally but grief also can take a physical toll on you) and you are in a fog.  Then you start to feel better. The worst is over but that fog is replaced with that post-cold medicine feeling where you are still tired, your head feels kind of hollow and you feel what you imagine to be strung out.

While I felt like a horrible person for feeling this way, I came to a very important realization.  And maybe it was meant for me to realize this at my grandmother’s funeral, as each other the three funerals has taught me a lesson.

My grandmother’s funeral taught me that I am a survivor.  The worst of my grief is over and I am stronger.

And provided that my daughter- and any other children I may have- outlive me, then I have already lived through the worst days of my life. Sure, bad things are still going to happen.  But I survived Bryon’s death and that means I can survive anything.

Because life is only temporary.

And while I don’t know what my grandmother’s thoughts were on The Righteous Brothers, I know Bryon liked them.  And this weekend I heard this song for the first time since Bryon died and it just seemed to fit how I have been feeling lately.  So I am going to end on it.

8 thoughts on “My grandmother’s funeral”