Warning- Stop reading Mom!  I know you read everything I write, but do not read this story.  (She has major bug phobia).

So tonight two of my good friends came over to help me around the house to to help me prepare for my new couch which arrives in the morning.  The three of us love Mexican food and we planned on ordering Mexican food for dinner.

I opened the food ordering app because I prefer to order my food online.  Because I hate talking to people on the phone that much.

I do not see our normal go-to restaurant listed.  So we decided to try a new Mexican restaurant.  I quickly google the name and I learn that it is a restaurant that specializes in authentic cuisine from the Oaxaca region in Southern Mexico.  I said we should be adventurous.  The worst thing that could happen was that the food wouldn’t be good and we would have to get food from somewhere else.

We decided to give it a try.

I look at the menu and made a comment about the fact that they had cow tongue.

One of my friends decided on a grasshopper burrito.  The description seemed palatable and it said there was a choice of meat.  My friend wanted chicken.

My other friend decided she wanted to order the same thing.

I looked the menu over and became overwhelmed so I ordered chicken tacos and an order of chips, guacamole and salsa.

When the food arrived, we were starving and ready to eat.  I pull out the two burritos.  My daughter said she wanted one and I said that they belonged to our friends.  I gave my daughter some guacamole and chips and one of my chicken tacos.  We all dig in and we talk about how good the food was.

Then one of my friends jumps and says that her burrito actually has grasshoppers in it because one just fell out.  My other friend was about five bites into her grasshopper burrito and she stops eating.  I was eating chicken tacos but I lose my appetite in solidarity.  The only one who continues to eat without being phased is my daughter.

We contemplated what to do.  Do we call the restaurant and try to get something else?  My friends felt bad because I put the whole order on my card.  I assured them that this was such a good story that it was worth every penny.

Seriously, I have been bummed lately.  I haven’t laughed this hard in a very long time. This might have been the hardest I laughed since before Bryon got sick.

My friends decided to just order a pizza instead.  With no meat.  And orange soda.  Sunkist.  Though the person on the phone called it Outcast soda.  Hey ya!

The burritos went into the trash.  My friend brought the trash outside which was good because I was having images of the grasshoppers coming back to life in my house.

My poor friend got the creepy crawlies.

You can’t really tell by the picture but in person, you could totally see the grasshopper legs. 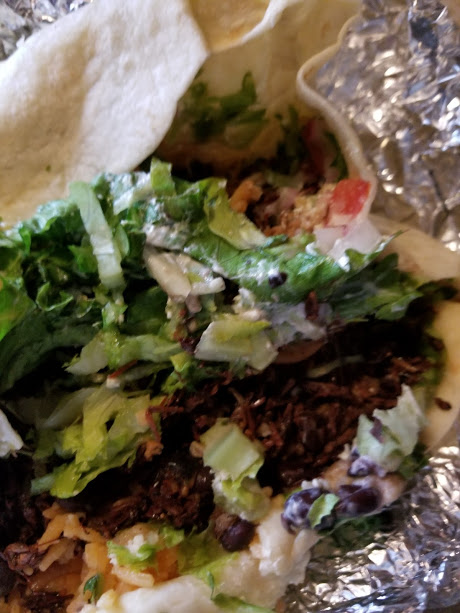 A quick google search does reveal that grasshoppers are actually part of the diet in Mexico’s Oaxaca region.  They are called Chapulines.  So this cuisine is authentic.

Just a bit too authentic for us.

7 thoughts on “The time my friends ate grasshoppers”