Earlier this week, I had the opportunity to attend an event with NFL player and patient advocate Rolf Benirschke.  This event took place at the New York State Capitol and was put on by GOBOLDLY and New York Health Works.  The event was attended by a diverse group of people including legislators, legislative staff, researchers, pharmaceutical company representatives, representatives from healthcare organizations and patient advocates.  I was excited to have the opportunity to attend this event.  I am trying to learn as much as I can about health care and patient advocacy.  I attended this event with one of my best friends, Jen.  She is the New York State and Vermont Advocacy Director for the National Multiple Sclerosis Society.

The event opened up with NY Assemblywoman Crystal D. Peoples-Stokes (D-Buffalo).  She talked about her experience working with hospitals in Buffalo and how they collaborate with private companies who are working bringing the latest medical technology into Buffalo Hospitals. She also shared a personal experience about a friend with lung cancer who was receiving a cutting edge therapy in New York City that was developed in Buffalo at Roswell Park Cancer Institute.

Rolf Benirschke was in his second season as a kicker for the San Diego Chargers when he was diagnosed with ulcerative colitis.  In his third season, he collapsed on a cross country flight and had to have two surgeries and spent 5 weeks in the ICU.  Like Bryon, he lost part of his intestine and went into septic shock and had organs shut down.  He came close to dying.  Rolf states that he didn’t know why his life was spared, but he was given a second chance.  He got his position back with the San Diego Chargers and played for seven more seasons.

Rolf also stated that while he was in the ICU, he received 80 units of blood.  This was in 1979 when blood screening wasn’t as safe as it is today.  Rolf contracted Hepatitis C.   Rolf was given therapies for Hepatitis C which worked.  He expressed gratitude because he knew that he was lucky.  He brought up how Arthur Ashe contracted HIV from a blood transfusion that he received while having heart surgery.

It was inspiring to see Rolf share his story because the only way we are going to make positive changes in our healthcare system and patient care is by education.

We are living in exciting times when it comes to medicine.  My job is in oncology data and I see it.  They can test some tumors for the specific markers within that tumor and a patient can get a treatment based on their specific tumor markers.  I truly hope that diseases with a grim prognosis will be curable in our lifetimes.

Jen and I got a chance to speak to Rolf.  We discussed barriers to patient care and we discussed part of Bryon’s story.  I encourage everyone to get out there and learn about the healthcare system.  You don’t need to work in healthcare to learn about it.  You never know when you need to apply that information for your own care or that of a loved one. 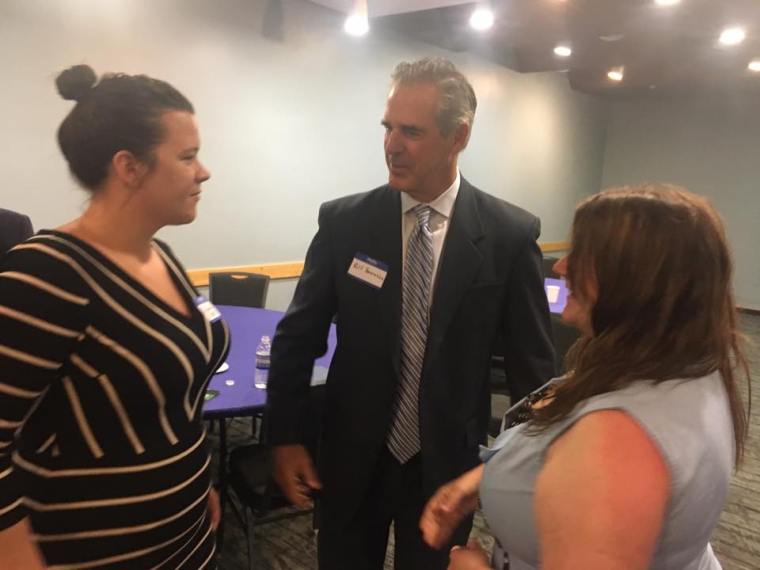