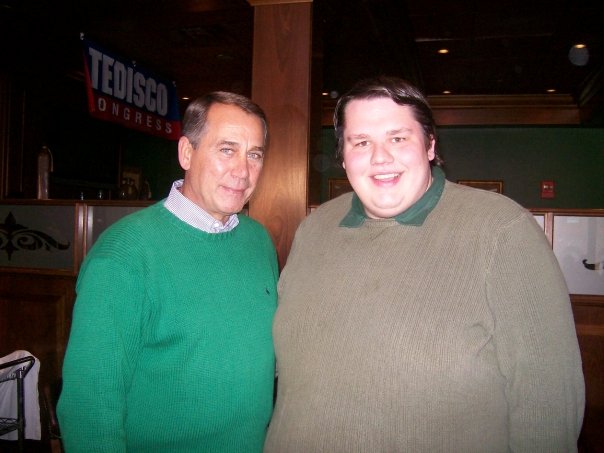 Yesterday my daughters Godmother had posted an article on Facebook about the scientist behind the research of BRCA1.  (BRCA1 is one of the gene mutations that is linked to breast cancer.  This research has positively impacted cancer treatment.)  This scientist had had a string of bad luck.  Her husband left her and her home was burglarized.  Also within this story was a random encounter with Joe DiMaggio in an airport.

Now I know the featured photo on this blog post is not a random encounter but I didn’t have any pictures of random encounters.  So I thought I would put a picture of Bryon with Speaker Boehner.  Bryon loved him so much that he named our cat Boehner.  And I actually agreed.

This is the story of some of those encounters.

My first random encounter was at a Celtics game at the old Boston Garden (now the Fleet Center).  They were playing the New York Knicks.  It was a Friday night and I was in the eight grade.  My aunt was given the use of her boss’s season tickets so she asked my parents and me to go to the game with her.  They were floor seats and I remember that the players were so tall that it hurt your neck to look at them.

I wasn’t into basketball so I didn’t even have a Celtics shirt.  I wore white leggings and this horrible light purple sweater with white stars.  I got rid of that sweater a long time ago and now I kind of wish I had it.

I remember my mother saying “Isn’t that Michael Douglas?”

I had no clue at that time who Michael Douglas even was.

The people sitting next to me were taking a picture of him and then he left.

I wasn’t that impressed with the encounter.  I was more excited about seeing myself in the game highlights on the news.  I even recorded them on a VHS tape with a VCR.

I was a junior in high school and it was my first day training as a cashier at Ellsworth Shop N Save.  I would ring up each order while my trainer Martha watched and guided me.

I rang up my fourth ever customer.  Martha asks me a question.

Martha: “You know that was Paul Stookey, right?  He lives in Blue Hill.”

I was at my second ever Young Republican event and I was in an elevator and someone told me that Congressman J.C. Watts was at the hotel.  He wasn’t part of our event so he counts as random.  I had just read Congressman Watts book, What Color is a Conservative.  The elevator stopped on a floor as did the one immediately across from it so you could see into the elevator car.  I look and I see Congressman J.C. Watts.

Congressman J.C. Watts just kind of smiled and waved though I could tell he thought I was nuts.

There isn’t much lead up to this story.  I was in Borders shopping or browsing.  Then I see Stephen King.  I don’t say anything because anyone from Maine knows that you leave Stephen King alone.

I am sure Bryon had many encounters.  I am sad to say I don’t remember.  It never dawned on me to try to memorize everything he told me because he wouldn’t be around to confirm any stories.

But I do remember one encounter.

I assure you that when Bryon found me, he gushed to me about being in an elevator with Michael Phelps.

Have you ever had a random celebrity encounter?